New Delhi (India), Nov 28 (ANI): Paying tribute to his late father Harivansh Rai Bachchan a day after his 112th anniversary, megastar Amitabh on Thursday shared some lines from the late poet’s renowned book ‘Madhushala‘.
“Jeevan se ooba, icha hai janm na fir paun, par yadi janm pade lena hi, Bharat me hi aau (tired of life, I do not wish to be born again, but if I am born again, I want it to be in India),” read the lines.
Big B also posted a picture of his father sitting on a stage at a Kavi sammelan in Kolkata. 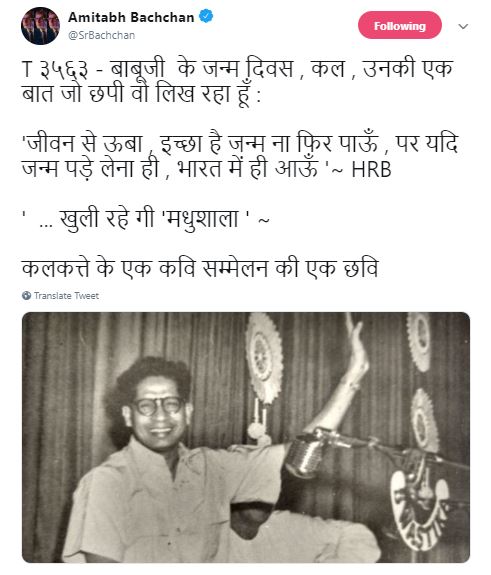 Wednesday marked the 112th anniversary of one of India’s noted poets.
He is credited with some outstanding poems, which include ‘Aakul Antar’, ‘Ekaant Sangeet’, ‘Soot Ki Maala’, ‘Aarti Aur Angaare’ and ‘Bahut Din Beete’.
Abhishek Bachchan too paid respects to his late grandfather by sharing a picture of him with grandmother Teji Bachchan.
“Still remembered, still missed, ” he wrote on Instagram.
On the work front, Amitabh has a number of films in the pipeline including his first collaborations with Ayushmann Khurrana and Emraan Hashmi in ‘Gulabo Sitabo’ and ‘Chehre’ respectively.
The 77-year old, who has completed his golden jubilee in Bollywood, was honoured with the ‘Icon of Golden Jubilee’ award at the ongoing 50th International Film Festival of India on November 20. (ANI)