Deepika, Ananya, Siddhant Chaturvedi to be in Shakun Batra’s next

New Delhi (India), Dec 19 (ANI): Bollywood actors Deepika Padukone, Siddhant Chaturvedi and Ananya Panday have been roped in Shakun Batra‘s next film giving us a never-seen trio on-screen.
The film which is yet to be titled will be co-produced by ace filmmakers Karan Johar and Apoorva Mehta.
Confirming the news, film critic and trade analyst Taran Adarsh shared on Twitter, “IT’S OFFICIAL… #DeepikaPadukone, #SiddhantChaturvedi and #AnanyaPanday in Shakun Batra‘s next film [not titled yet]… Shakun [#EkMainAurEkkTu, #KapoorAndSons] will also produce the film with Karan Johar and Apoorva Mehta… Starts 2020… 12 Feb 2021 release [#ValentinesDay].” 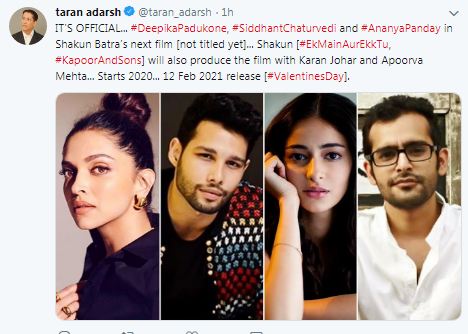 The film, which will go on floors early next year, will hit the screens on February 12, 2021.
Meanwhile, the ‘Padmavat’ actor is gearing up for her upcoming biographical film ‘Chhapaak’ based on the acid attack survivor Laxmi Agarwal, set to release on January 10, 2020
Ananya Pandey, who is basking the success of her previous outing ‘Pati Patni Aur Woh’, is busy shooting for ‘Khaali Peeli’ opposite Ishaan Khatter.
SiddhantChaturvedi, who rose to fame with his performance in ‘Gully Boy’ is preparing for the remake of ‘Bunty Aur Babli’. (ANI)