The summer season is synonymous with mangoes. It’s really difficult to live through summers and not indulge in juicy mangoes. Also, since the fruit is available only during this time of the year, the excitement to devour the same in the scorching heat is different altogether. And someone who seems to share a similar feeling is Sachin Tendulkar’s daughter Sara Tendulkar. Sara shared a Boomerang of her mango indulgence on Instagram where we could see a box filled with the chopped fruit. The peeled and sliced mangoes looked fresh and delicious. Sara just added a sticker alongside that read, “Yay”. 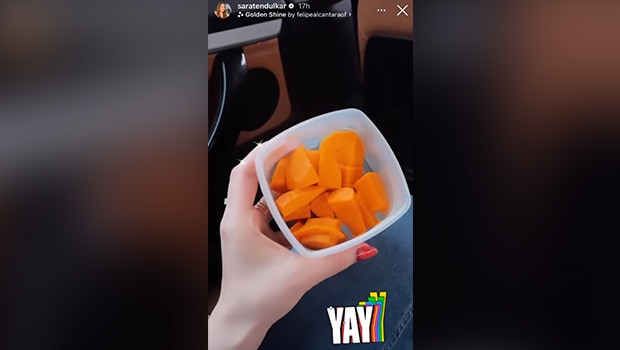 This is not the first time we have seen Sara Tendulkar gushing over mangoes. Those who follow her closely, know that she loves indulging in a variety of dishes and sometimes, likes to cook up a storm in the kitchen. So, when her mother, Anjali Tendulkar, expressed a desire to have a mango treat, Sara prepared drool-worthy ice cream for her. While giving us a glimpse of her whipping the delight in a mixer-grinder, Sara wrote, “Mango ice cream in the making”, and also tagged Anjali and added, “Your wish is my command.”

Apart from mangoes, Sara Tendulkar is also vocal about her love for coffee. She keeps sharing different kinds of videos or pictures dedicated to coffee. Once, she flooded her Instagram Stories with glimpses of her visit to the London School of Coffee. She dropped pictures from the Institute showing the professional coffee-making machine and snippets of her class. She also showcased how many coffee cups she prepared to learn the skill. Her caption read, “Practice makes perfect.” After the intense coffee training session, Sara called it a day with some lip-smacking Asian food. She gorged on noodles, soup, spring rolls and many other dishes.

Last year, during a trip to Goa, Sara Tendulkar shared a photo of herself relishing some delicious food. On the plate, we could spot some healthy salad dressing with microgreens, sprouts and cherry tomatoes. There were some fried nuggets as well, garnished with cheese. Sara, who was holding a glass of cold coffee with a big smile on her face, captioned the post, “Laughing because I saw the salad dressing.” Read more about it here.

Sara Tendulkar’s food diaries are so relatable, aren’t they?