Priyanka Chopra is one versatile and talented celebrity. Acting, producing, dancing, singing, writing, philanthropy and more – is there anything that she cannot do? Fans and followers of the actress would be aware that Priyanka Chopra ventured into the food business as well in 2021, with her maiden venture called ‘Sona’. Based in New York, Sona serves modern Indian food with a twist. The eatery boasts of a long list of celebrity visitors including the most recent ones – Vicky Kaushal and Katrina Kaif. And now, Priyanka Chopra’s restaurant was visited by a legendary British singer. Can you guess who? It was none other than popular musician Gordon Summer aka Sting. Take a look: 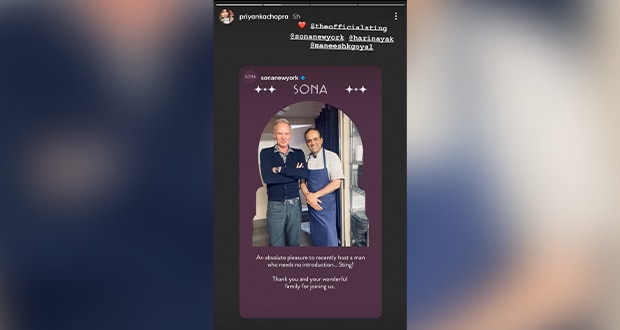 Priyanka Chopra took to Instagram to share a photograph of Sting posing with Sona’s chef Hari Nayak. The photo was also shared by the chef on his Instagram handle. British singer Sting – best known for tracks like ‘Desert Rose’ and ‘Every Breath You Take’ – had also got his family along with him on his visit. “An absolute pleasure to recently host a man who needs no introduction… Sting! Thank you and your wonderful family for joining us,” read the story.

Recently, newly married couple Vicky Kaushal and Katrina Kaif had also visited Sona New York for a delicious Indian meal. Katrina Kaif took to Instagram to share a picture from their visit and compliment Priyanka Chopra on her restaurant venture. “Home away from home – Sona New York. Loved the vibe – Priyanka Chopra as always everything you do is just amazing,” Katrina wrote on Instagram. Take a look at the picture from their visit:

On the work front, Priyanka Chopra has multiple projects lined up. She will be seen in ‘Jee Le Zaraa’, a travel flick directed by Farhan Akhtar that is also starring Katrina Kaif and Alia Bhatt. Chopra is also shooting for an OTT drama series called ‘Citadel’. Priyanka and husband Nick Jonas also recently became parents to a baby girl via surrogacy.

About Aditi AhujaAditi loves talking to and meeting like-minded foodies (especially the kind who like veg momos). Plus points if you get her bad jokes and sitcom references, or if you recommend a new place to eat at.